The flounces  of wood and bone comprise an attempt to clear my thoughts, to lose the narrative behind the image.
The image of drapery is banal.  But for me these white folds hide the story of western culture – from antiquity to Christian culture. Hinting at the presence of the body- hidden erotica without which there would be nothing. I call this series THE WILL.

The series of dark books is more complicated, layered, with multiple meanings.

The theme began haunting me years ago… Last autumn I tackled it again and started sculpting books of ebony and jet. I saw a link with Eco’s The Name of the Rose – with the destruction of occidental verbal wisdom... The inability of words to describe the nature of things, and the attempt of culture to redo this despite everything. The result is jewellery made of carved and actual books – holes piercing them create a bracelet.

It seemed powerful as an image – to shove your hand through words, thereby destroying the content of the book and nullifying the message.
I call this series THE NAME OF THE ROSE.

Living and working in Tallinn, Estonia. Tanel Veenre was educated as a jewellery artist (MA) in the Estonian Academy of Arts (1995-2005) and the Gerrit Rietveld Academie in Amsterdam (1997-98). exhibiting since 1996, Veenre is known for a broad oeuvre including jewellery, photography and fashion, often intersecting. In 2012, Veenre was named as a professor of Design Faculty at the Estonian Academy of Arts.

The Will / The Name Of The Rose is Tanel Veenre's second solo exhibition at Ornamentum. 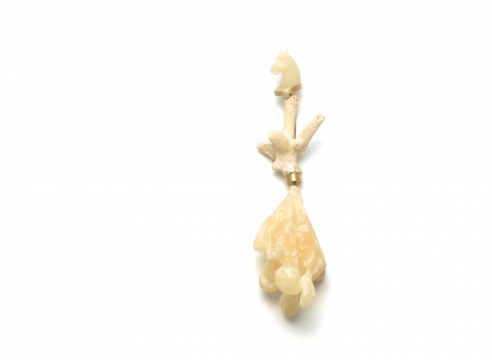