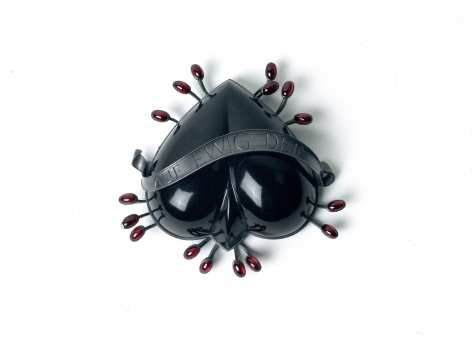 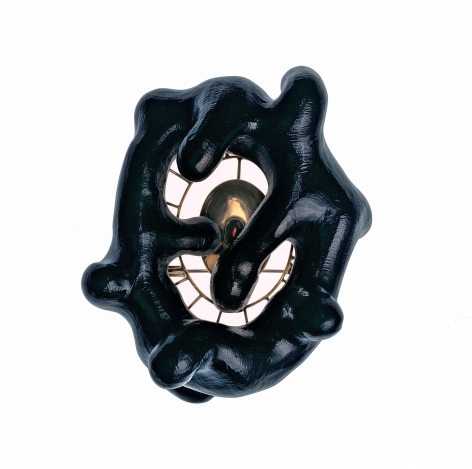 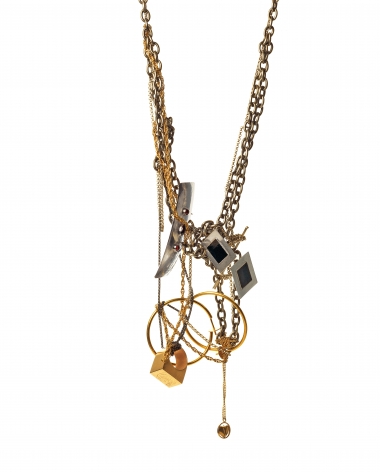 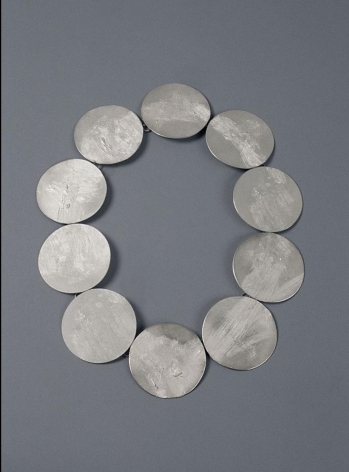 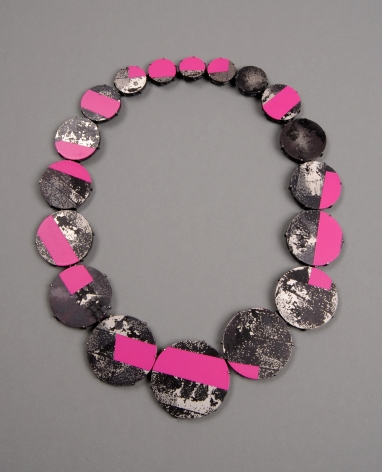 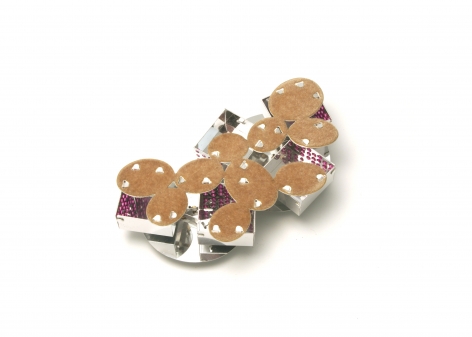 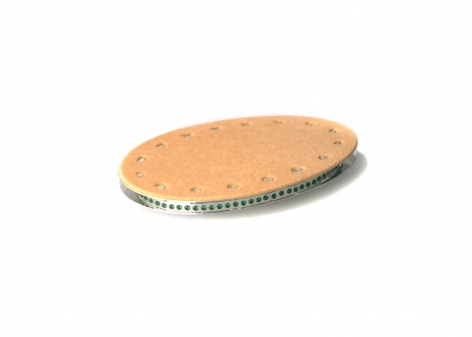 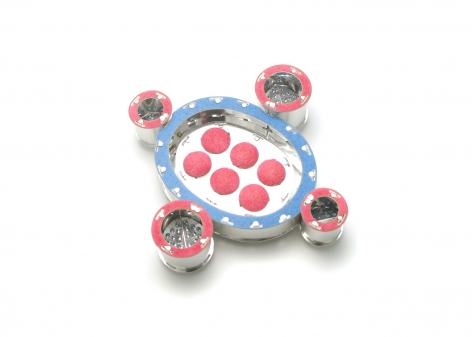 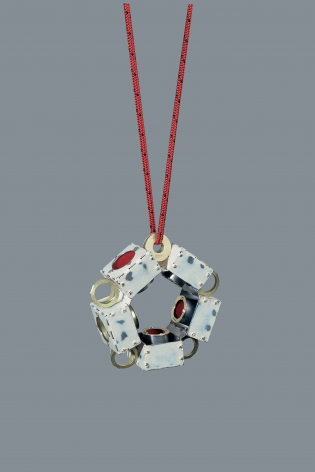 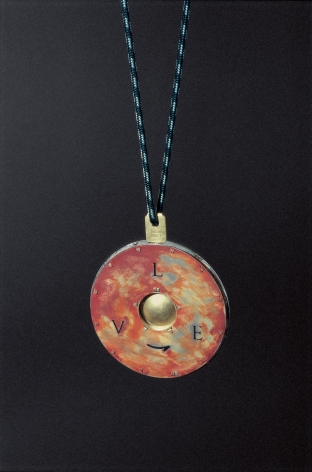 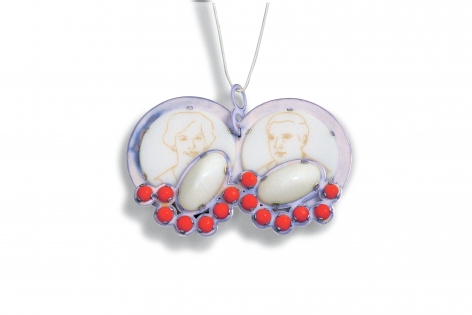 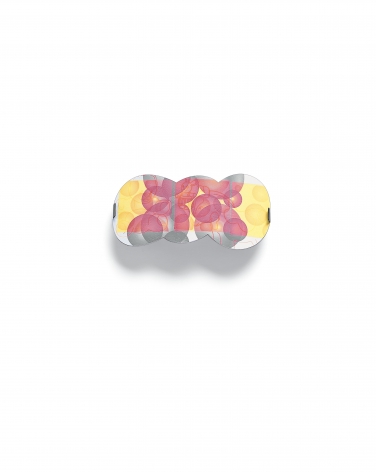 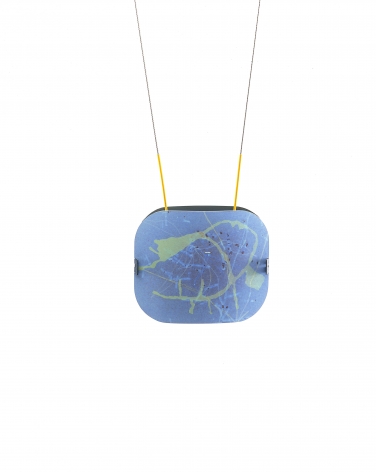 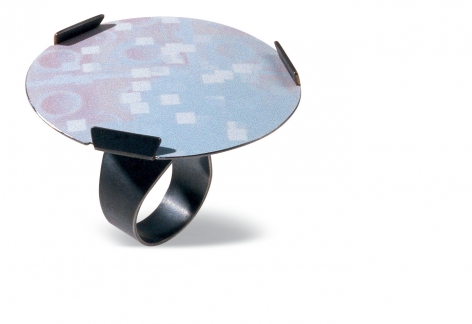 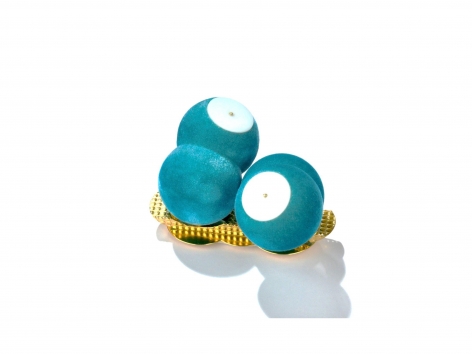 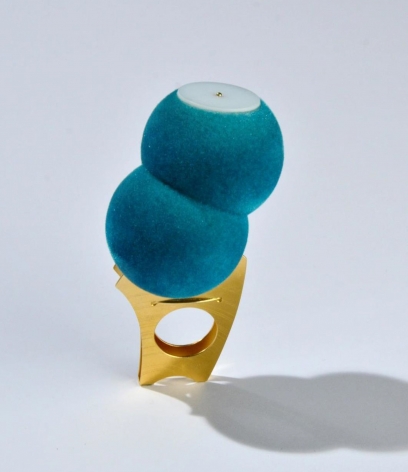 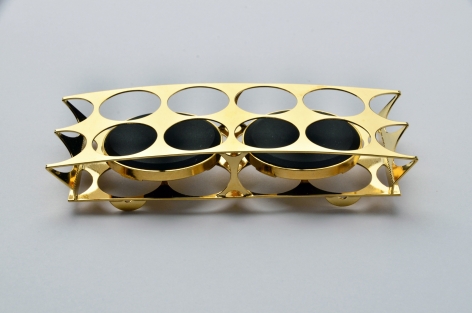 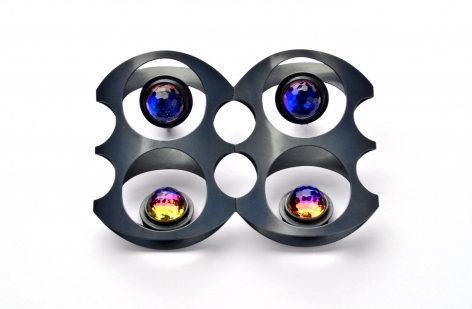 Born 1964 in Germany, Weber is one of the most fascinating jewelry voices coming out of the Munich Academy of Fine Arts.

Having practical training in both gold and silversmithing, Norman earned his Masters at the renowned establishment under the direction of Otto Künzli, Herman Jünger and Horst Sauerbruch.

Taking inspiration from the world of costume jewelry that finds an industrial home in his Bavarian town of residence, the juxtaposition between the real and the imitation finds itself as a central theme in much of his work- meticulous constructions of plastics, highly polished aluminum, synthetic fiber flocking among others, are combined with traditional jewelry materials in bold sculptural statements.

Since 2011, Weber is teaching at the technical school for glass and jewelry, Kaufbeuren- Neugablonz, Germany, he has been awarded numerous design prizes in Germany, including receiving the honorable status of City Goldsmith of Schäbisch Gmünd.  Works by Norman Weber can be found in the permanent collections of the Museum of Arts & Design, NY, the Jewelry Museum of Pforzheim, Germany, the International Design Museum of Munich, Germany and more, as well as numerous important private collections.

In Weber's debut exhibition with Ornamentum, NOW: 20 Years Norman Weber Part 1, opening at the Collective Design Fair in New York City, finds a curated collection of 1-3 pieces from various bodies of work undertaken by Weber since his time as a masters student at the Munich Academy of Art.  While each series contains a unique aesthetic, the works converse with each other to show Weber's intriguing approach and unique design style, often bound with recurring approaches, materials and ideas.

In this series I worked with the ideas of traditional bejeweled gemstone jewelry.  I was fascinated by the jewelry pieces from Tiffany, Bulgari etc., yet I also see them as the acknowledgement of the general expectations of jewelry.  It glitters and shines… an “Aesthetic of Appearances” as described by philosopher Ernst Bloch.

These works are a type of commentary.  I wanted to bring something solid to the material, color and handwork of the pieces, that also hint at playful eroticism underlying their amorphous forms.

The upside down heart in “Auf Ewig Dein (Forever Yours)” may resemble a butt, and the phallic nature of “Penisier Orden (Penis-like Badge)” is quite obvious.  During this time I was studying the work of the surrealistic artists, even though I find much of the work atrocious, I find the inner meanings quite fascinating.

The different Colliers belong to my exploration of precious (stone) jewelry.  I used different methods to bring this image of traditional Colliers into my jewelry.

In some instances I printed and painted etc., in other instances I damaged or erased the painting, in other examples I stirred gemstones into the mixed colors.  With the printed pieces I layered images and text over another or typed X’s over an image with a mechanical typewriter in order to correct the form.  Later I laid the stripes of color over almost- disappeared images of jewelry, to give the effect of a fading memory.

In an earlier work, I painted a yellow Collier I was fascinated by the dissolving of wax with mineral spirits on a brush.  I created the silver necklace by removing wax prior to casting in this manner, but the effect is that material has been added to the surface similar to painting.  This play with real and fake, reality and simulation fascinates has always fascinated me.

As a child I have the memory of looking through my mother’s jewelry box, and when I tried to remove one piece, a whole cluster of jewelry would emerge, the pieces interlocked and hanging on each other.  I found this quite interesting… real and imitation, valuable and cheap intertwined together in compositions of chance.

As a jeweler, we think of our work “in a white box”, but the reality is that when the owner wears the work, she is often wearing other pieces together.  The pieces speak a dialogue with each other on the body.

Within the piece “Gruße Dich” is a playful allusion to Gerd Rothmann.  During the time I made this work I also worked as an assistant to him, and included a signature ring form of his within the tangle- as well as an allusion to my own work in a small heart charm that has the form of my older work “Forever Yours”.

These pendants of stainless steel were created with strong constructivist aspects, but during their realization, especially in the application of color, intuitive process phases were deciding factors in the results.

Color was applied in many thin layers on the steel form, and partially sanded away in areas.  Through the changing colors the surface becomes lively, breaking up the technical perfection of the steel construction.  The pendants give the appearance of being pieces broken from a larger form, and hint of age and use.  The steel “fragments” are finished with the addition of elements of gold.  Only through this do they become wearable.

The thinking behind these works is stemming from found objects, pieces that seem to have stories to tell, written within the traces of use visible on the surface.

In the creation of the “Objects”, the difficult task was to design a piece that appeared as a found object on the surface, yet doesn’t belong to any specific time or origin.  The object should remain open for the images and thoughts of the observer.

The brooches and pendants of both series “Private Mythology” and “House and Garden” revolve around the term “Home Town”.  Childhood memories are often bound with feelings that are triggered through smells, names, people, objects etc.

Ernst Bloch referred to the Home town as being in a sense a fiction, a yearning for something that no longer exists.  One may add to the memory, things that never were.

While looking through my childhood photo album, I came across pages that stood out to me due to their strange matter-of-factness.  My mother had taken photos of our newly finished house for my father who was in Holland for work for some time in the 70’s.  In this matter of fact manner, she documented the furnishings and details as if taking an inventory.  This distanced observation is something I wanted to pass on in my work, as the theme posed great risks of creeping towards triviality and sentimentality.  It seemed to me the perfect tool for achieving my goal was the computer.

In the group Private Mythology, images (like stuffed animals, the chair of my father, the portrait of my parents etc.) are transposed into plastic with laser engraving.  The metals have been lacquered in numerous layers and sanded away in certain areas giving the appearance of use on the surface.  Glass stones from the 60’s and 70’s are used, and I sometimes grind away from the surface to remove their perfection and hint at their age.

In the group House & Garden, I have taken photos (for example of the garden of my mother or of details such as wallpaper or carpet patterns from the house of my parents, or toys such as Lego or model trains, from my childhood) as the starting point and have abstracted them on the computer, creating unrecognizable patterns.  These motifs are digitally printed onto steel plates held by oxidized silver structures.  These silver pieces can be divided into five different types, all of which were developed – formed from flat sheet, a theme that still interests me today.  Paper models, drawings as well as the computer all assist me in finding the final form for these constructions.

In Neugoblenz, a city section of Kaufbeuren where we live, was settled after WWII by Czechs coming out of the costume jewelry industry. This industry was rebuilt here in Bavaria.  They created imitation and colored stones of glass for these accessories, and are still making jewelry for fashion house labels such as Dior, Hilfiger, Joop etc.  What I enjoy is working with the theme of costume jewelry in my own work.  Often costume jewelry is closer to the Utopia than real jewelry… and again, whether real or costume, it revolves around the concept of real vs. fake.  It is about glamorous facades- projection- surfaces for our wishes.

I worked for a number of months in various companies making costume jewelry.  These experiences are evident in the series Bijou, Comic and Flock Balls.  In Bijou and Flock Balls, the modular building systems found in costume jewelry are of interest.  I developed “building blocks” that could be combined in different combinations.  In Flock Balls, the use of ping pong balls were the means to the end… they are light, stabile and make large volume possible, and the resulting pieces again find themselves relating to my earlier surrealistic jewelry works. 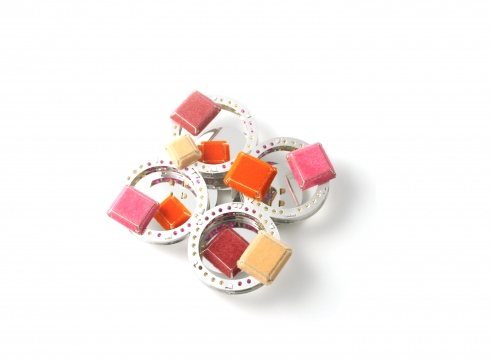