Ornamentum Gallery’s decision to pair David Clarke with Jaydan Moore may seem an uncontroversial one. They are clearly like-minded, both in terms of process and aesthetics. Yet, because of a particular dynamic within the contemporary craft and design scene, the juxtaposition is actually quite provocative.

I’ll go on to explain, but first, a brief introduction to both artists is perhaps in order.

Clarke has long been the key figure in British smithing, at least at its avant garde extremity. Equal parts bad boy and consummate master, he has staked out his position through a distinctive use of found objects, very much in the “assisted readymade” tradition of Duchamp. Most of his work involves the alteration of silver and pewter domestic wares, such as spoons, sugar bowls, and teapots. He cuts these apart and recombines them, often to humorous and narrative effect. He also employs casting, capturing the ghost of the original object - a particularly powerful example is a short stack of cast pewter cups, cast from the one that his mother drank from just before she died. Each successive cast uses a little less metal, creating an effect of disappearance. It’s a touching work, and consistent with Clarke’s overall position on sentiment, which he does not engage in actively, but rather represents with sympathy and understanding. He has also created distinctive bodies of work in which metal vessels are encrusted with salt or sugar (the latter are a collaboration with Natalie Smith). These attest to his sureness of touch with materiality, and ability to summon up a sense of time’s passage. Like much of his best work, the encrusted pieces are at once surrealist and everyday, like a dream one might have during an afternoon nap.

The Ornamentum exhibition also features Jaydan Moore, a young American smith whose interests and techniques bear close comparison to Clarke's. Moore has lately been a resident at the Penland School of Crafts in North Carolina. I had a chance to visit him there last year, and was impressed by the quantity of old silver he had amassed: piles of platters, blackened with tarnish. Like Clarke, Moore cuts these antique objects apart and reconfigures them, but his approach is more lyrical and draftsman-like. The works feel intuitive, like drawings, despite the hard craft that went into their making. He has also created a series of prints based on the engraved patterns in the old silver, underlining his interest in graphic quality.

The key difference between the two artists is in their ‘touch’: Clarke tends to work into his materials, and explore massive, textured effects, while Moore’s handling is more clean, surgical and precise. If one wanted to be grand about it, one could say that the differences between Clarke and Moore recall the longstanding art historical opposition between colorito and disegno, originally intended to distinguish between the Venetian and Florentine painters in the Renaissance, and later applied to such contrasting figures as Rubens and Poussin.

In any case, it seems clear that Moore, a younger artist, has learned from Clarke’s example but also has struck out into new territory. However – and this why the gallery’s choice to mount the show is so interesting – some people in the metals scene have grumbled that the work is too close; that Moore is “derivative” of Clarke. By putting on this two-person show, Ornamentum is essentially calling this issue out into the open, inviting viewers to make up their own minds.

For my own part, as I have said, I think Moore already has an important and unique voice and that it’s developing quickly. But it seems worth pausing over the widespread sensitivity to over-similarity – an attitude that is particularly pronounced in the studio craft world. In the fine art world, a bigger ocean, there is certainly occasional concern about derivativeness. But the more usual tendency is to recognize like-minded artists as inhabiting a “movement” or “scene.”

Art historians do not dismiss Derain for being influenced by the older and more innovative Matisse, or Van Doesburg for being influenced by Mondrian. They may recognize the primacy of an innovator, but they are also curious about the way that a good idea circulates. Moore has a shorter track record than Clarke so far, that is true; but to say that his work is simply derivative rests on the unspoken assumption that key tactics like the assisted readymade should be associated with a single maker. That assumption simply does not exist in the fine art context.

Where does the anxiety about imitation in the crafts come from? I can think of a few possibilities. First, the field’s proximity to design may prompt concerns about intellectual property. Unlike painters, industrial designers and the companies they work for exert legal control over their work, and try to prevent its being copied. This is of course because of mass production; having invested in design development, a manufacturer does not want to see their product undercut in the market. While this dynamic is not really operative in the crafts, it’s possible that the field has borrowed designers’ notions of originality.

A second possibility is that the domain of studio craft is just not large enough for people to work in closely allied idioms. There aren’t enough collectors or specialist museums paying attention to this field as it is, so when an artist does establish themselves they don’t relish the competition. That is of course a provincial attitude in the extreme – redolent of the Old West showdown starter, “this town’s too small for the two of us.” (To his credit, Clarke will have no part of such territorialism, and welcomes the chance to show alongside Moore.)

These factors no doubt have a certain relevance, but I think the real reason for studio craft’s anxieties about influence has to do with that old bugbear, art status. It’s worth remembering that craft in its historic modes was rife with “imitation.” It was not only unproblematic, but essential to the whole enterprise. Apprentices were expected to learn from their masters. Guilds reinforced stylistic and technical uniformity within each trade. Stylistic change was relatively slow, and conformity to existing modes was prized. Innovation happened incrementally, and was based on a deep respect for existing models.

Obviously, the feeling that every studio craftsperson should mark out an absolutely independent territory directly opposes this historical model of practice. Uniqueness serves as a safeguard against the tired canard that craft is not about creativity, only execution. It is a straightforward case of overcompensation: ironically, contemporary craft is much more preoccupied with originality than fine art is. Perhaps the feeling is understandable, but it is also misplaced. For the obsession with independence of voice actually undermines the ability of the field to achieve momentum and rich internal discourse, which are the real drivers of creativity.

When an emerging maker sees something in the work of an established maker, they should lay claim to it, reinvent it, absorb it into their own work. That is how any discipline progresses - not by reinventing the wheel over and over again in ignorance of precedent, but through adoption and reinterpretation. It seems to me that this is exactly what Moore has done, and more power to him.

Picasso supposedly said, “good artists copy, great artists steal.” Some viewers may consider this exhibition a crime scene; but contemporary metalwork is all the better for it. 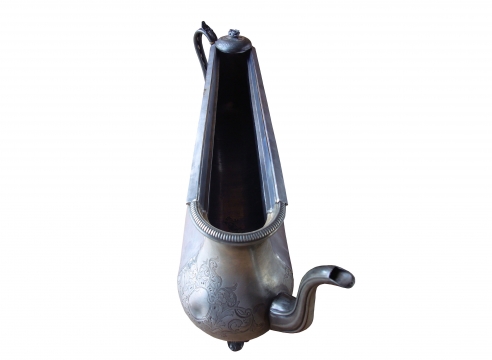 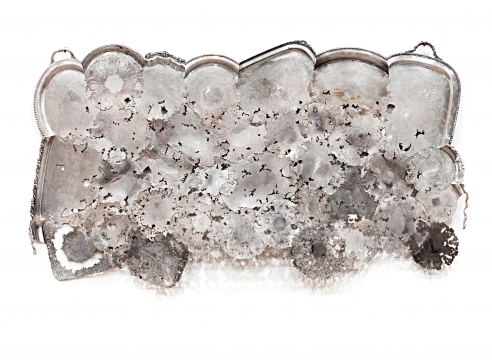