The Centerpiece / The Blank

by Iris Eichenberg (US) and Alberte Tranberg (DK),

an exhibition of table and wall sculpture,objects and wearable artworks.

The Centerpiece / The Blank

it seems there is an echo in the works of Eichenberg / Tranberg.

Both bodies of work have two components it seems.

There are the pieces that sit on the table, the center of attention.  Then there are the wall pieces and medals, staring back at you blankly, void of imagery but willing to take on whatever your imagination projects onto them.

The Flower Centerpieces of Eichenberg are the aftermath of bloom, frozen in time, while the handheld vessels of Tranberg gather as a still life, the notion of a weight of sorts.

Eichenberg's medals- a selection from an edition of 365, serve to honor others.  Tranberg's larger-than-life portraits capture you in reflection as they stare back at you, holding and capturing time-

leaving an uneasy space, orbiting like the oval forms reapeated in their works.

Iris Eichenberg was born in Germany. In the 1990's she moved to the Netherlands to study at the prestigious Rietveld Academy, where she later became the department head for the jewelry and metals program.  In 2007 Eichenberg was recruited to head the same department at Cranbrook Academy of Art in Michigan, a position she continues to hold to this day. Eichenberg has been a featured exhibiting artist with Ornamentum since 2007, her work the subject of five solo exhibitions and several presentations at Design/Miami, FOG Art & Design Fair and SOFA Chicago / NY.

Tranberg hails from Copenhagen, Denmark.  After training as a traditional metal worker, she traveled to the USA to receive her MFA at Cranbrook in 2018 as a Fulbright recipient.  At the completion of her studies she returned to her native Denmark to open a studio, continuing to create artworks and design objects for numerous exhibition in the USA, Denmark and beyond.  The Centerpiece / The Blank is Tranberg's first exhibition with Ornamentum.

Due to Covid precautions, the exhibition will open without a formal reception.

Iris Eichenberg will be available to meet by appointment on or around August 29. 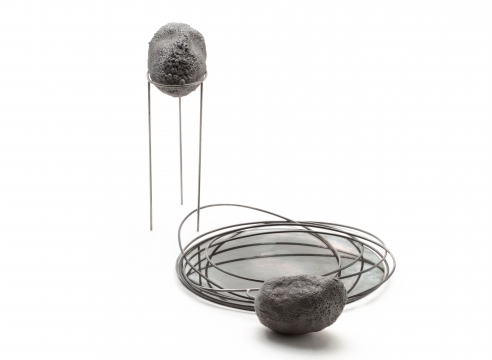