A solo exhibition by David Bielander.

Following Ornamentum’s acclaimed premier of the gold Cardboard bracelets at the Design Miami / Basel, Switzerland fair, Bielander broadens the theme- and his play on the recognized, established concepts of value and beauty with his latest Cardboard Crown necklaces and bracelets.  Bielander hides nobility in plain sight, laboriously creating by hand, a wearable piece with substantial material value disguised as the creations of a child first discovering scissors and stapler.

“Will people actually pay money for these?”

The observer of these works may not recognize that they are looking at something precious… and it is up to the discretion of the wearer to let them in on and allow them to marvel at the secret, or to allow them to continue on their way in the belief that they have found something about which to chuckle smugly.

We have all probably worn a cardboard crown at some point in our childhood, and we all probably have the desire to be bestowed with a crown of regality on occasion.  In the latest works by David Bielander this crown is accessible, camouflaged as the role-play headdress of the kindergartener within us.

"Our perceptions are based on our conceptions of what is familiar.  If a shift in the normal context of something occurs, it can trigger a shock to our understanding, forcing us to examine the object in a manner completely new to us.  Things don’t remain the things we perceive at first glimpse.  The Cardboard works materialize the ambiguity, the multifaceted nature of things.

The subversion of the obvious continues in the other half of the exhibition, Bielander’s Flat Face brooches.

“It looks like a mouth”, any child would exclaim upon beholding the polished agate slices, so David embraces the kitsch, placing stones upon them as eyes… once again piecing together a laborious work disguised as a project akin to the macaroni necklace… an insider’s joke poking fun at his jewelry colleagues who would never allow themselves to make such obvious references. 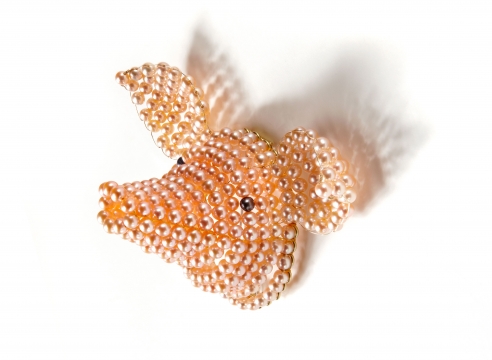