modelled in clay in the negative with traces from a 1950's diamond ring.

Born 1947, in Zurich, Swiss jeweler Johanna Dahm has been at the cutting edge of jewelry design since the early 1970’s when she and a partner produced series-oriented jewelry fashioned of Aluminum and Plexiglas.  Her experimentations have always explored forward-thinking resonations of (jewelry) design, from the afore-mentioned use of non-traditional materials, to later works which saw the jewelry object as less important than the action- the play of reflected light on the skin for example, or the performance- monumentalizing the exact moment a jewelry item becomes an adornment as a shield-like tissue paper neckpiece can only be worn by ripping it over the wearer’s head, the resultant tears forever bearing witness to the action, the original object can never again return to its original virgin state.

From 1990- 2005, Johanna Dahm worked as tenured professor at the University of Design in Pforzheim, the jewelry center of Germany, where she influenced the development of countless young artists / designers of jewelry.

During the late 1990’s, Dahm did return to the traditions of jewelry, but not the typical West- European traditions, but that of West Africa, the continent where she grew up. Dahm used her sabbatical leave to explore the unique casting technique of the Ashanti tribe in Ghana, working as an apprentice of the Ashanti King’s goldsmith…  something that she was very fortunate to be able to do, as I is still taboo for women to do this lost-wax casting technique within this culture.  Her research led her, 6 years later, to East India to learn that region’s approach to what is astonishingly enough essentially the same technique.  Subsequently, Dahm’s work embraced a more sensual expression of form and wearibility from then on. Voluptuous ring-forms paid tribute to her experiences and impressions in Africa.

In the Ashanti method of casting, there is a Zen-like experience of accepting the chance nature of whether a casting succeeds or not. Later series embody this attitude still further.  In her “fast ASHANTI” rings, she skipped the normal step of creating a model, and simply pressed a cavity into the clay that would become the casting receptacle, giving even more leeway to the fates and in the most recent incarnation of “fast ASHANTI, she allows an element that did not cast fully, a hole in the top of a ring for example, to be seen as a deliberate design element and this accepted accident would see itself “enhanced” with additional adornment.

Johanna Dahm’s explorations of these traditional techniques continue to this day, but in 2011 she also began a new series: “Wilhelm Tell’s Shot”, exhibited recently at the Museum Bellerive, Zurich and debuting in the USA with Ornamentum at Design /Miami 2012.  Spurred on by the international banking crisis, she explored the story of the Swiss folk hero Wilhelm (William) Tell, whose personal battles against the controlling interests of the money-handle of his day, led to the iconic story of his being forced to shoot the apple balancing on his son’s head.  In this new (unlimited) series, Dahm attacks today’s symbols of value- gold and silver bars or coins, and shoots through them with the modern equivalent of Tell’s crossbow, a machine-gun.  The resultant form is a completely new conversation piece, with elements harkening to several of the subsequent themes of Dahm’s oeuvre – the precious bar is brutally pieced and torn open in a way not unlike the “Jewelry Happening” pieces, the extreme force of the bullet gives the metal bar subtle voluptuous curves, and the by chance nature of what will result from a force that is out of the artist’s control once it leaves the weapon’s chamber must also embrace a similar mind-frame as her self- invented “fast ASHANTI” casting method.  The resulting product is a surprisingly comfortable and stunning ring, the violent method of transformation negating its value as a precious material commodity, replacing it with the integrity of artistic value. 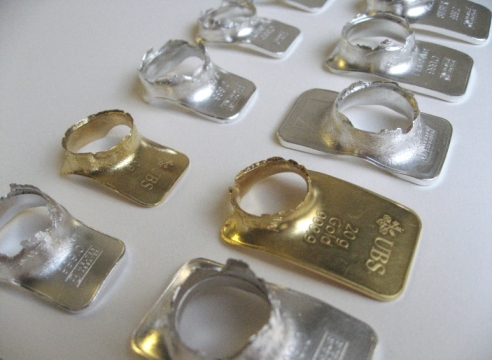